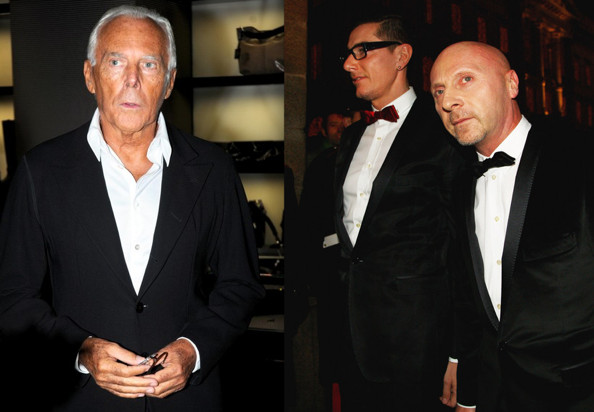 We’ve all heard of names like Marc Jacobs or Stella McCartney being thrown around in the fashion industry, but a lot of us have never actually seen these people. So, you’ve probably wondered whether they even actually exist. It turns out that they do, of course, so here’s a list of fashion brands’ most famous faces.

The Italian-born designer is known for his tailored lines and jaw-dropping red-carpet fashion. But he’s also the first designer to ban models with a body mass index of less than 18, after model Ana Carolina Reston passed away, and we’re so glad he did that.

Hilfiger Corporation is one of the most recognizable brands in the fashion industry. But the designer is also a perfect example of why you should never give up. At 20, he opened his clothing store but went bankrupt 5 years later. Then he moved to New York City and worked for several brands before giving his own clothing company, Tommy Hill, a shot. Now he has a corporation that’s recognized globally.

The American fashion designer owns Donna Karan New York and DKNY clothing labels. She studied at Parsons School of Design and now produces creatively simple designs that are , and she’s often called The Queen Of Seventh Avenue, and there’s a reason for that. All you’ve got to do is check out her uber wearable lines that would make any woman feel like royalty.

Simons was born in France to a family of farmers but knew he was destined for greatness. So he moved to Paris when he turned 18 to study at the École supérieure des arts et techniques de la mode (also known as ESMOD). After his mother had passed away, he created the brand Jacquemus in honor of her. He’s a big fan of clean original designs that are simple cuts.

Roberto Cavalli studied weaving techniques, which motivated him to open up his own textile printing business. By the time he was 32, the designer had created his first ready-to-wear collection in Paris. After that, he opened a fashion boutique, and his name was linked with styles that are truly irresistible, and accentuate a woman’s sex appeal.

Michael Kors knew he wanted to be a designer since he was 5. By the time he was a teen, he had sold the clothes he crafted in his parents’ basement. In 1981, he launched the Michael Kors women’s label at Bergdorf Goodman. But you might have also seen him as a judge on Project Runway.

Jean-Paul Gaultier can thank his grandmother for introducing him to fashion. But he never received any type of training. He simply sketched and sent his ideas to famous outfitters when he was young. Then Pierre Cardin saw how talented he was and hired him as his assistant in 1970. Now he’s a world-renowned designer, and the rest is history!

Alexander Wang is synonymous with urban and sleek designs. Two years after graduating from Parsons School of Design, he received critical acclaim after presenting a women’s ready-to-wear collection on the New York runway. Today, he has a huge fan base, which includes Rihanna among a long list of A-listers.

Domenico Dolce and Stefano Gabbana met while working for the same fashion house in Milan in 1980. Five years later they created their own line which was inspired by the classic feminine look of Sicilian women.

New York City native Calvin Klein has the world going cray-cray for undergarments with the CK logo on them. But panties aren’t the only things that the Calvin Klein brand produces. They also make accessories, perfume as well as other styles of clothes. But as far as underwear goes, the fashion industry probably wouldn’t have been the same without his contribution.