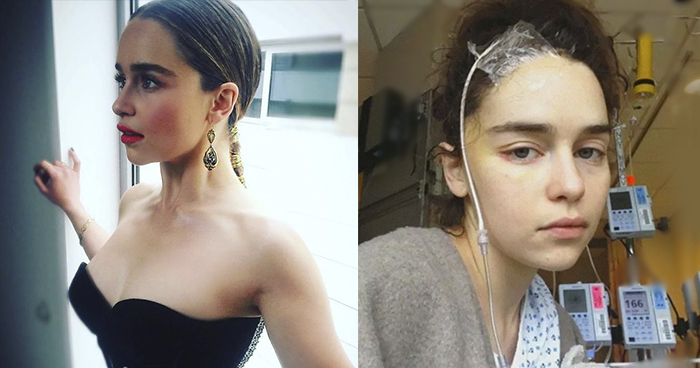 Emilia Clarke is best known for playing the role of the mother of dragons, Daenerys Targaryen on the hit TV show, “Game of Thrones.” Ever since the first episode was released in 2011, Emilia made it a point to keep her life as private as possible. And for a long time, she was able to keep it that way. But just recently, she has begun opening up about the horrible health problems she had to battle in real life. Emilia was struck with the first of two aneurysms that completely changed her life right after she had finished shooting the first season of “Game of Thrones.”

A Battle for my Life

In a recent article in The New Yorker, Emilia opened up about the health challenges she’s faced while filming “Game of Thrones.” Way back in 2011, after she was done wrapping season 1, Emilia was rushed to the hospital for urgent surgery. At the time she didn’t know she had a condition that one-third of the population suffers from. Even worst? This condition could kill you way before you even notice the early signs.

“I was terrified. Terrified of the attention, terrified of a business I barely understood, terrified of trying to make good on the faith that the creators of ‘Thrones’ had put in me. I felt, in every way, exposed,” Emilia explained in her essay, “A Battle For My Life”. Needless to say, the young actress felt the need to find a way to cope with fame and all the pressure that came with it. “To relieve , I worked out with a trainer. I was a television actor now, after all, and that is what television actors do. We work out,” she added.

She Was Under a Lot of Pressure

While working out in the gym one day, Emilia felt a sudden bout of pressure in her head. She went down to describe it as if a rubber band was pressing on her brain, squeezing hard. For a moment, she tried to ignore the pain — to just push through it. But then she realized she couldn’t ignore it anymore. She told her trainer that she needed a break and headed for the locker room.

This Was Something Major

In her essay, Emilia explained she was able to figure out that something was very wrong right off the bat, so she asked for help. “My trainer had me get into the plank position, and I immediately felt as though an elastic band squeezing my brain. I tried to ignore the pain and push through it, but I just couldn’t. I told my trainer I had to take a break. Somehow, almost crawling, I made it to the locker room. I reached the toilet, sank to my knees, and proceeded to be violently, voluminously ill. Meanwhile, the pain—shooting, stabbing, constricting pain—was getting worse. At some level, I knew what was happening: my brain was damaged.”

Down for the Count

She struggled to make it, and once in the bathroom, threw up “violently and voluminously” while the pain just kept getting worse. Emilia could sense that something was seriously wrong. This wasn’t your typical headache. But worse than the pain was the fear. The sense of doom that something may be wrong in her brain, which is obviously a key function for any actor.

It All Happened So Fast

“I remember being told that I should sign a release form for surgery. Brain surgery? I was in the middle of my very busy life—I had no time for brain surgery. But, finally, I settled down and signed. And then I was unconscious. For the next three hours, surgeons went about repairing my brain. This would not be my last surgery, and it would not be the worst. I was twenty-four years old,” Emilia explains. In those moments of darkness, the mother of dragons even asked the staff to pull the plug. If she couldn’t act, she didn’t even want to live. She obviously wanted to keep on living, but she couldn’t cope with the idea that her entire world could’ve ended right then and there. “I’d never experienced fear like that — a sense of doom closing in. I could see my life ahead, and it wasn’t worth living. I am an actor; I need to remember my lines. Now I couldn’t recall my name. In my worst moments, I wanted to pull the plug. I asked the medical staff to let me die. My job — my entire dream of what my life would be — centered on language, on communication. Without that, I was lost.”

Back on the Throne

Finally, after the doctors ordered an MRI scan, Emilia learned her diagnosis. “The diagnosis was quick and ominous: a subarachnoid hemorrhage (SAH), a life-threatening type of stroke, caused by bleeding into the space surrounding the brain.” The official name for her condition was a subarachnoid hemorrhage. Emilia needed surgery fast, but it didn’t take her long to get back on her feet. Returning back to work six weeks later, the young actress asked the team at “Game of Thrones” to never reveal to the public what had happened to her. As far as she was concerned this was a private health condition and she wanted it to remain that way.

Two years later, the problem returned with a second aneurysm. With a part of her brain not receiving blood temporarily, a part of it actually died. Doctors couldn’t confirm exactly which function would be affected, but Emilia took it all in her stride. She jokes that it’s the part of your brain that affects taste in men that she’s lost.

The Power of Dragons

Getting back to work helped Emilia recover. She struggled with the recovery, of course, but she quickly realized that turning up to set and playing such a powerful character that was full of fire and passion helped her find her own inner energy. Emilia has started opening up about the condition and is very honest about the fact that she is not the only one in the world to be struggling with it. Aneurysms affect a lot of people, and often in ways far worse than what she has experienced.