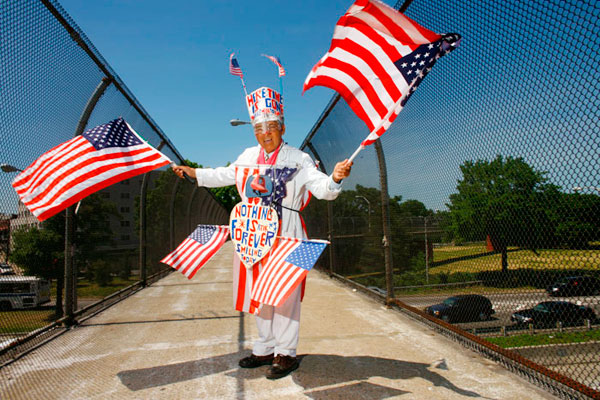 What might seem like ordinary behavior to most Americans can actually come off as totally weird to foreigners. There are tons of things we do out of habit that seem perfectly normal to us. In fact, we would find it weird not to do some of the things on this list. But foreigners probably look at us like we’ve just grown a second head whenever they catch us doing some of these random everyday things.

We Give Our Credit Card Info Out

In other countries, customers don’t just surrender their credit cards to their server at a bar or a restaurant. They keep sight of their card at all times. But in America, everyone’s just too darn trusting. Hasn’t anyone ever heard of something called identity theft or credit card fraud?

There’s nothing wrong with showing a little pride in your country. But in America, everyone goes a bit overboard, especially when it comes to the American flag. It’s impossible to walk into a church, a school, or a business and not find a flag. You’ll probably find one at restaurants too, especially in the South.

You Ask for Ice

It’s practically unheard of in other parts of the world to have a server put ice in your water. But in America, people will ask for a glass that’s basically full of ice. On the plus side, this is kind of cool because when you pour your beer or soft drink, you won’t drink it all in one gulp because the ice takes up so much space in the glass.

You Need a Personal Bubble

Don’t burst an American’s personal space by getting too close and personal. They don’t like that. It makes them very uncomfortable if you get too touchy-feely, even if you are someone they know. In fact, the less contact, the better as far as they’re concerned. This undoubtedly surprises foreigners who are used to greeting strangers with a hug and a kiss on the cheek.

The Date’s All Out of Whack

In Latin American and European countries, the date’s order goes like this: DD-MM-YY. But Americans write dates in this order: MM-DD-YY. So, as far as the rest of the world is concerned, America doesn’t know how to write dates in the right format on their checks or schoolwork assignments.

You Eat Lunch for Breakfast

In most countries, you’d be lucky to have a croissant or a saltine cracker with your tea or coffee. But in America, breakfast is the most important meal of the day and it shows. They eat eggs, omelets, bacon, and sausages, which is something other foreigners would prefer to eat later in the day.

Free Refills Are a Must

Waiters are always eager to refill your glass of wine or soft drink and if you have a self-serve soft drink dispenser like the ones at some Burger King restaurants, you’ll end up refilling your cups before they even dip below the halfway point but that’s probably because the refills are free.

Everyone’s Always Giving a Thumbs Up

Americans tend to give a thumbs up when they see something they approve of. But for some foreigners visiting from places like Australia, Greece, and the Middle East, giving someone a thumbs up is the equivalent of flipping the bird, which is probably the last thing you ever intended to do.

You Could Drown in All the Options

If you walk down the aisle at a supermarket and find yourself craving Pringles, you’ll have a lot of options to choose from. There’s sour cream & onion, BBQ, sriracha, buffalo burger, honey mustard and more. But you can pretty much find a wide variety of flavors for pretty much any food item at the store.

Open Presents in Front of Everyone

Everyone loves opening their gifts in front of others in America. There’s something about seeing the reaction of the person getting a gift that’s so rewarding. But foreigners find this very weird and would much rather take their presents home and open them so they don’t have to fake happiness when they get an awful gift.