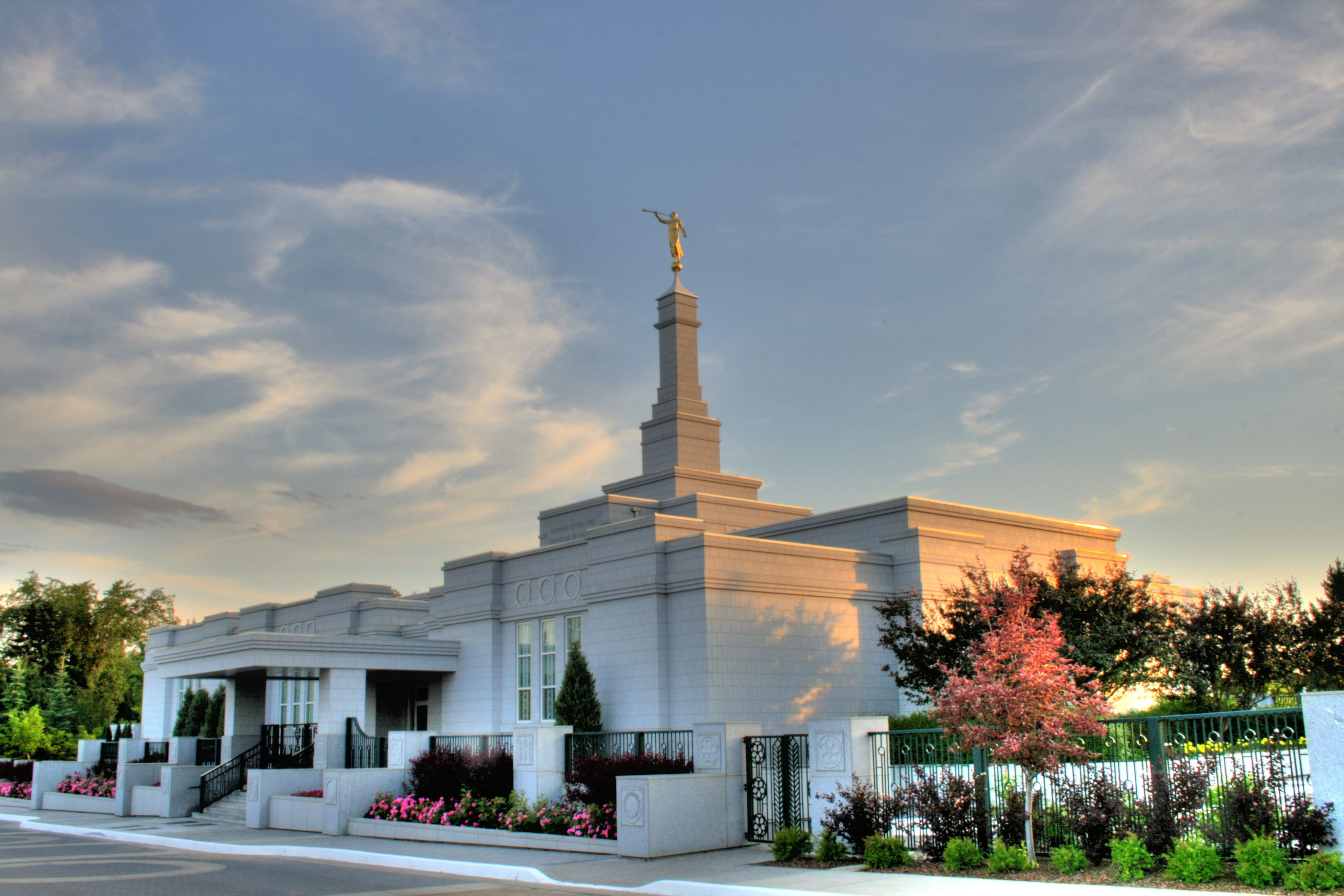 If you take a deep look into any religion or set of beliefs, you’re bound to find some crazy things that don’t make a lot of sense. But when it comes to the Mormon religion, you don’t have to look that deep until things start to get weird. Some of the odd tenets of Mormonism are relatively harmless and don’t have much bearing on how people practice their religion. But that doesn’t make them any less stunning and confusing. Let’s take a look at some of the wacky, out-of-this-world things that Mormons are actually supposed to believe.

The good news here is that this isn’t going to affect anyone until the afterlife. Also, who knew that there were multiple levels in Heaven? Isn’t it just supposed to be one big party on a cloud? In any event, Mormons warn follows (and non-followers) that they will be genderless in the afterlife unless they live the kind of life that gets them to the top level of Heaven. How exactly being genderless works and who decides if you make it to Heaven’s top level is anybody’s guess. But you have to admit that this is a good (if really unusual) tactic to keep people in line and get them to walk the straight and narrow. Would you really want to risk the mystery of a genderless existence by being a bad person? It’s probably just better to follow along with all of these wacky beliefs so you can reach the top level of heaven.

Speaking of the highest level of heaven, apparently, there is a two-wife minimum, at least for men. Most people have probably heard about the connection between Mormonism and polygamy, so this shouldn’t be that surprising to hear. For the record, the Mormon Church officially abolished polygamy in 1890. However, the church still believes that having multiple wives is still part of the afterlife. Apparently, there are way more women in heaven than men, so they need at least two or three women with each man to make sure everyone gets paired up. It’s also worth noting that there are tens of thousands of Mormons who still practice polygamy here on Earth. In fact, you might have seen some of the TV shows about it, just in case you needed any more proof. The Church has tried to distance itself from the modern-day practice of polygamy, but it’s still very much a part of their beliefs.

Only Group Dating is Allowed and Only After Age 16

Typically, parents can choose to be strict or lenient when it comes to their kids dating, but the Mormon Church also wants a say. Let’s be honest, this is a church that tries to stick its nose into every part of your life, so why not control how you date? According to the church, dating isn’t allowed until age 16, and even then, only group dates are allowed. This seems a little odd, especially if you’re still not married when you reach your mid or late 20s and you’re still having to go out on group dates. Fortunately, there are Mormon-specific dating sites that can get you set up with a nice group of people that will hopefully include your future spouse. On the other hand, imploring followers to go on group dates makes the whole polygamy thing a lot more reasonable.

Most of us are aware that Mormons must go on a two-year mission at some point in their lives. You may have even been approached by Mormons on their mission who tried to convert you. However, one little caveat you may not know is that Mormon missionaries aren’t allowed to go swimming. Naturally, there is a reason for this, and that reason is that Satan controls all of the world’s lakes and rivers. Sounds obvious, right? Whether or not Satan controls backyard pools is a little less clear. However, Mormons, in general, are instructed to avoid water, which is why a lot of them aren’t strong swimmers, and that’s no joke. In fact, it’s hard to believe there aren’t more jokes out there comparing bad swimmers to Mormons. Seems like an oversight by the medians of the world.

Sundays are for Church Only, Nothing Else

Okay, so most religions want you to go to church on Sunday. But the Mormon faith expects you to go to church and do nothing else. You can’t have a job that forces you to work on Sundays. You can’t just relax and watch TV. Even students doing homework is a little tenuous when it comes to the Mormon faith. Presumably, they’re spending all day in church. After mass, most Mormons are probably doing things to help their community or their fellow Mormons. But it’s still gotta be a little weird to do nothing else all day. Sure, Sunday should be a day of rest and religion, but Mormons really take it to another level.

Dinosaurs are From Other Planets

It’s not a huge surprise that Mormons have a say on code. When it comes to the clothes followers wear to church, there are specific guidelines to follow. However, it doesn’t stop there. One of the most unusual rules of the Mormon church is that women aren’t allowed to sleeveless shirts. I know, the audacity of women thinking they could wear such attire in the first place. In their since Mormons aren’t going to go swimming, they won’t be hanging around beaches or pools, so there are fewer occasions when sleeveless shirts would be worn in the first place. However, restricting sleeveless shirts seems a little overboard.

Did you think the Mormon wardrobe influence ended with sleeveless shirts? Think again. Mormons are required to wear a special kind of underwear called a “temple garment.” Somehow, this special undergarment is supposed to protect Mormons from evil and temptation. While these outfits don’t look all that fashion forward, many Mormons truly believe in their power to keep them free of evil and temptation. Also, now that we think about it, pulling off a sleeveless shirt with this on underneath would be tough, so it does make a little sense that Mormons would be obligated to wear this special underwear.

No Coffee or Tea

If you’ve ever met a Mormon, you probably know that they are restricted from drinking alcohol. In fact, Utah has some unusual rules about ordering alcohol in public places because of Mormon influence. However, did you also know that Mormons aren’t allowed to drink coffee or tea? Somehow, caffeine is supposed to be evil, although even decaffeinated coffee isn’t allowed either. Let’s face it, a lot of people in this world need coffee just to survive their day while others use it as a simple pleasure they look forward to during their day. But the Mormon church just says “no” to all of that. According to Mormon scripture, any kind of hot drink is harmful to the body. It’s almost as if Mormons aren’t allowed to have nice things.

This is where things start to get a little dicey for the Mormon faith. The Book of Mormon actually states that having dark skin is a curse from God. This passage was only renounced by the church in 2013. Of course, it’s not the only passage in the Book of Mormon that can be interpreted as racist. To be fair, the Mormon church does have plenty of black members. However, black men weren’t allowed into the Mormon priesthood until 1978. There is also this long-held belief that those with dark skin will have their skin turn a lighter shade if they convert. No one’s saying that every Mormon believes this, but it’s easy to see why the Mormon church has sometimes been associated with white supremacy.

It’s All About Missouri

Did you think that Utah was the homeland of Mormons? Nope, it’s actually Missouri. In 1931, Mormon founder Joseph Smtih declared that Independence, Missouri (of all places) would be the site of the second coming of Jesus. Mormons also claim that Missouri is home to the Garden of Eden. Back in the early days of Mormonism, Smith company had some bad blood with Missouri, which is why the group relocated to Utah. However, Missouri remains an important part of Mormon history and its belief system. Followers are also encouraged to make a pilgrimage to Missouri before Jesus does for the second coming.

Even if some of these rules and beliefs sound a little weird and unnecessary, Mormons aren’t allowed to question them, which is another good way to keep people in line when they’re asked to follow some crazy rules. Any words spoken by a Mormon prophet are considered to come straight from God, so it must not be questioned or disobeyed. That’s just the way it goes in the Mormon faith. And remember, these 12 weird facts only scratch the surface of what the Mormon faith preaches.