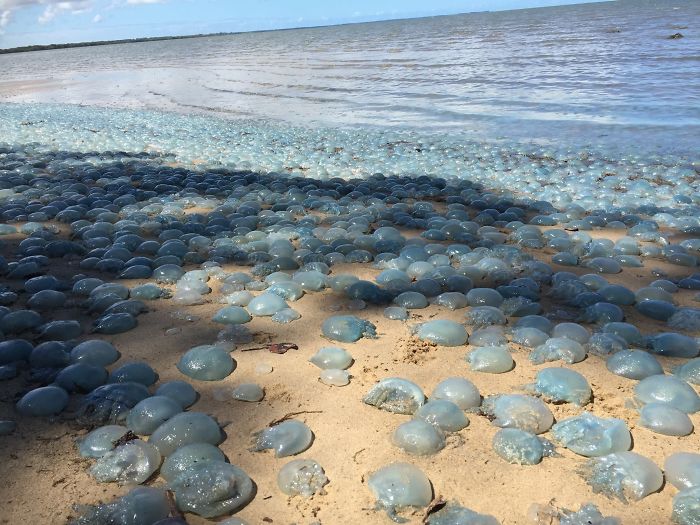 You can find all sorts of things when you go to the beach. There’s the scenery, the gorgeous people, and the warm sun. But next time you take a stroll on the beach, keep your eyes peeled. You might find interesting and bizarre things like the ones on this list. Once you’re done reading you might want to go to the beach and see if there’s anything nice like these things.

Most Perfect Sandcastle Ever

This isn’t the kind of sandcastle you would ever expect to find a kid building at the beach. It’s way too perfect. We can’t help but wonder how long it took to make, or why there seems to be a pair of ghost pants hovering near the shore on the upper right-hand side of this snap.

Having a Rubik’s cube wash up on shore is weird enough. But seeing one this big wash up is giving us serious X-Files vibes. Sadly, this Rubik cube is pretty much worthless since it looks like someone already solved it. But you can always mix it up and try again or keep it as a souvenir.

You expect to find one or two jellyfish lurking near the shore sometimes, but this looks more like a massive invasion against dry landers. Maybe they’re fed up with the way we’ve been polluting the ocean and are trying to send us a stinging message. We wouldn’t blame them!

Reindeer At The Beach

Could this be Kristoff from the Disney film “Frozen” looking for Sven? Maybe it’s one of Santa’s reindeers taking a break at the beach outside Harstad, Norway. Hey Dasher! Your boss wants you back at the North pole.

Is it just us, or does this look like the mask from Crash Bandicoot? We’re also getting some serious Fijian carving vibes from this thing that washed up on the beach. We hope no one picked it up. It might contain an ancient curse. You just never know!

Believe it or not, these are actually a bunch of floating around in the water by the shore of this beach. They must have formed during a snowstorm. But if we’re being honest, they kind of look like alien eggs to us. Here’s hoping no one put their hands on them!

We totally get this guy’s excitement after finding a fully blown puffer fish on the shores. How often does that happen? But we’re also kind of sad for the creature because it probably washed up and didn’t survive. Either we wouldn’t want to touch it. Those things are so poisonous!

Now, this is a whale of a find… literally! That’s a piece of the spinal column from a whale which somehow washed up on the shore. Just look at the size of that thing! We’ll bet there’s a story behind how this got here, and it probably wasn’t a happy ending for the whale.

A Soda Bottle From The Past

Now, this one’s a true collector’s item! You truly never know what will pop up when you’re at the beach. You could find a Smile soda bottle like this one which was patented on July 11, 1922. We hope whoever found it, cleaned it and kept it cause it’s beautiful.

Somehow, this sea weathered chunk of glacial ice made its way to the shoreline in Iceland, which is a good thing too. This guy would have had to sit in the black sand if it hadn’t been for this ice that subbed as a chair. But now his back is probably all wet. Cool seat, though!