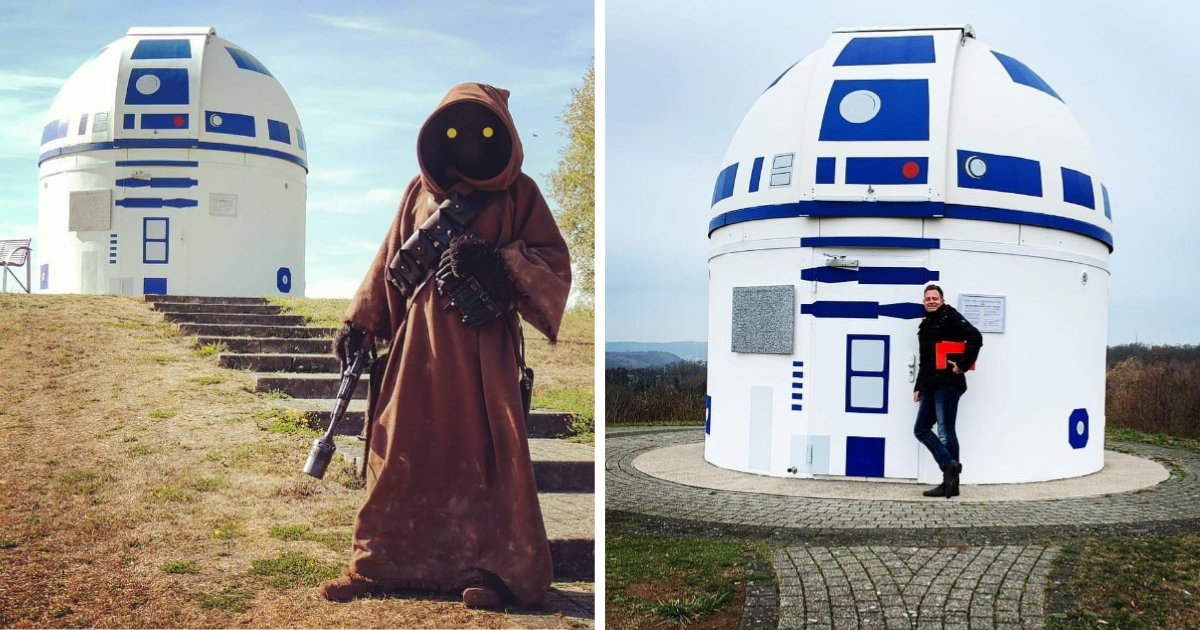 Germany may not be in a galaxy far far away, but it might as well be as far as professor Hubert Zitt is concerned. He’s known for doing Star Trek and Star Wars related lectures at the Zweibrucken University of Applied Sciences, and now he and a small team have turned the Zweibrucken Observatory of the Natural Science Association into a giant R2-D2 and the results are galactically fantastic!

The Genius With A Sci-Fi Fixation

If you ever have a question about electrotechnology, Dr. Hubert Zitt is your man. He has all the answers! Then again, why wouldn’t he? He received a doctorate from Saarland University in systems theory of electrotechnology and is a tenured professor at the University of Applied Science in Kaiserslautern, Zweibrucken. But this guy should have gotten a Ph.D. for his impressive knowledge in of sci-fi, too! Apparently, dr. Zitt is like a freaking sci-fi encyclopedia!

His Lectures Are Full Of Trek Talk

He gained recognition as a global top speaker for his Star Trek lectures. In 2005, he went on the road to other cities to offer his lectures at different universities. He even went to conventions like Europe’s largest science fiction convention, FedCon. Given his love for Star Trek, it was only a matter of time before he would work alongside a Star Trek Legend.

Zitt got so much attention in his field that in 2008, he collaborated with Star Trek creator Gene Roddenberry’s son on writing the preface of the book “Star Trek In Germany.” That same year, he started lecturing regularly at the University of the Incarnate Word in San Antonio, Texas, where he taught (you guessed it) “The Physics of Star Trek”. But how did a Trekkie come up with the idea to turn an observatory into a droid?

From Star Trek To Star Wars

Of course, Zitt loves all things sci-fi, not just Star Trek. Star Wars is also a big theme in the professor’s lectures and undoubtedly, a huge part of his DVD collection. So, one day, he decided to turn the Zweibrucken Observatory of the Natural Science Association into a humongous R2-D2. And if we’re being honest, we probably would have done the same in his place. You’d be tempted too if you saw a building that was kind of shaped like the beloved Star Wars character! Just look at it!

He Didn’t Do It Alone

Zitt had the help of his father-in-law Horst Helle and Klaus Ruffing, who painted the observatory’s exterior to match R2-D2’s design. He was also aided by several university students as well to provide the finishing touches. And now, the observatory has become a beacon for Star Wars fans everywhere. If we were going to this university, we’d probably spend hours taking different selfies in front of R2-D2.

Once word got out, it was only a matter of time before news of the observatory attracted the attention of a major Star Wars celeb. On March 22, 2019, Mark Hamill, aka Luke Skywalker, wrote “R2-D2 Observatory Transformed Germans Into Giant Nerds.”

We’re sure the university can rest a little easier knowing that R2-D2 is standing guard of the university. Zitt and his team did an incredible job. The shape is scaled to perfection! We only wish more university professors would be as fun as he is. These are the kind of projects that make life interesting. But judging from all the extra space near the observatory, we wouldn’t be surprised if the professor created a C-3PO or maybe a BB8 building right next to it so that the force can be with all those young padawans at the university. We can only hope!