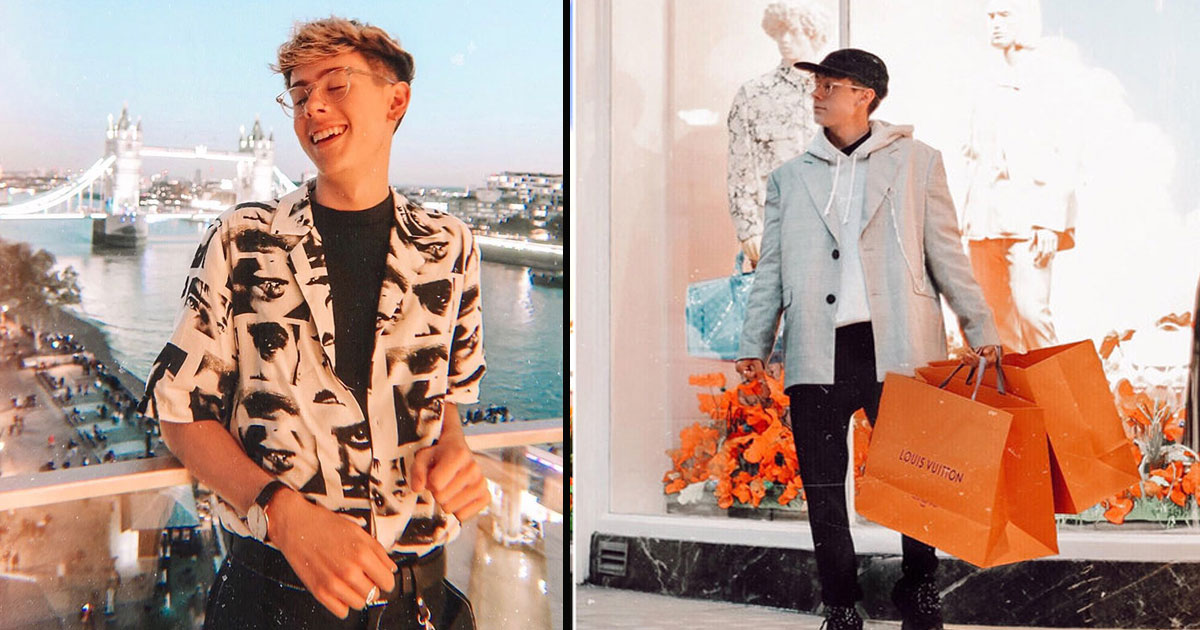 Hey! Guess what? It turns out you don’t actually have to be rich and well connected to convince people on Instagram you live a luxurious life. All you need are some snaps of you buying designer clothes, chillaxing on a private jet, or hanging out at some fancy party and you’re all set. Just ask 19-year-old London-based vlogger, Byron Denton who did just that with the help of photo editing apps, a little visual trickery, and some creativity. The results were so mind-numbingly real, he couldn’t believe how easy it was to trick people.

Byron Denton is known on YouTube as “” and he’s certainly not rich, but that didn’t matter to him. He wanted to do a little Instagram experiment to see how many people he could fool into believing he was uber-rich and living a lavish luxurious life. He was inspired by YouTuber George Mason, who faked going on vacation for an entire week. But he decided that instead of faking a vacay, he would take his project a step further.

The Life Everyone Dreamt Of

Denton believes that people tend to obsess over celebs because they’re always showing off a life of luxury that most of us can only dream of. So, with a little help from Photoshop, he made it seem like he had been lounging in a private yet, shopping at high-end stores, and living his best jet setting life. And seven seconds after he posted the first photo, he received 1,000 likes on Instagram. Talk about gullible!

Then, to pull off his rich dude facade, he wore a basic outfit that may have been inexpensive but looked as if it came straight off a Calvin Klein runway. But what made the faux snap a total hit was the Photoshop of the Louis Vuitton bags in his hand. In the original photo on the left, he only got 2,234 likes, 113 profile visits, and 44 comments.  But when the trickster decided to photoshop it and make it seem like he had bought designer wear, he received a total of 12,000 likes in the upgraded pic.

Most People Bought It

The photo of Denton hanging out at a lavish party managed to fool a whole bunch of people. In fact, the average untrained eye wouldn’t know that he had never attended a rich party or been on a private jet or bought expensive designer wear. You’d have to be really good at Photoshop to notice Denton’s images had been doctored.

Even His Family Was Curious

Fooling netizens was one thing, but even his friends and family were scratching their heads, wondering how he had suddenly become so freaking rich. He received tons of messages from friends and even followers who wanted to know if he had won the lottery.

As the number of likes, followers, and comments grew, Denton concluded that the reason why he became so popular was because people were curious about how he got wealthy. But he’s not a rare case. Most brand influencers start out by faking ads or sponsored posts in order to reach social media stardom and earn a six-figure salary through their brand advertisement.

It Was A Mixture Of Apps

So how did Denton pull this off? Well, it was a mix of several apps that included PicsArt, Adobe Photoshop Lightroom FaceTune. This allowed him to superimpose two images together really fast. In fact, he only spent around 45 minutes between shooting and editing.

Once the truth was revealed, it taught his followers (and us) a little lesson on the illusion of social media. No matter how picture-perfect most people seem online, you never know what’s going on behind closed doors. You really can’t trust everything you see on the internet. So, there’s a good chance that some of those high-profile bloggers you follow might be total fakes.