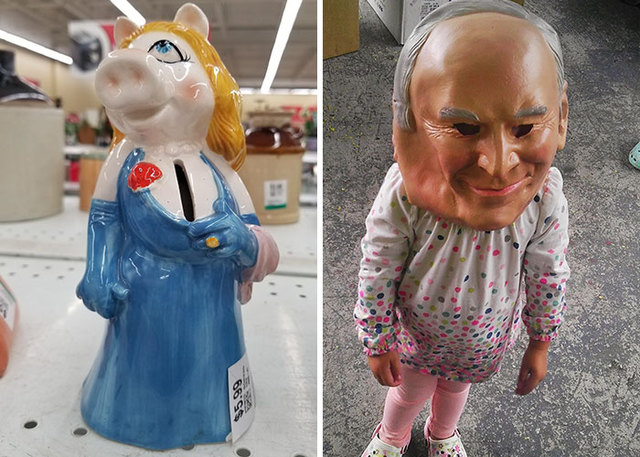 They say that one man’s trash is another man’s treasure. Well, there’s no place in the entire world that’s swimming in other people’s trash than your local thrift store, right? While department store products may be cute, clean, and sparkling new, nothing can match the thrill you get when you uncover a particular vinyl album you’ve always wanted to buy. Who could resist buying a neon pink satin bowling shirt embroidered with a giant, grinning devil and the name “Ralph” above the pocket? We know we wouldn’t! If you spend enough time at the thrift store, you’re more likely to find some weird object you never even knew you needed. Sure, thrift stores and garage sales are full of interesting and quirky little trinkets. But they have good and useful stuff, too, as any college student can tell you. After all, where else can you walk out with a bag full of clothes, a dart board, and a pair of sneakers under 20 bucks? To honor all the crazy stuff people have found at thrift stores, we’ve compiled a list of a few special finds uncovered by diligent thrift store shoppers.

Okay, so this taxidermy squirrel is beyond nightmarish. But this creepy gem could come in handy when it’s time to decorate the house for Halloween. Really, is there anything scarier than a dead squirrel that somehow made it through Australian customs, according to whoever snapped the pic and shared it with Shiftythrifting.com?

Aww, poor Pluto! He’s feeling less of a man, (or, ehm, less of a planet?) ever since he figured out he’s only half as wide as the US. But don’t worry, Pluto, we still love you despite your tiny size!

Well, He Finally Caught Him

We love the fact that someone took the time to get this framed. Perhaps they did it as a way to commemorate the only time their poor, inept cat was able to catch a mouse in their entire life.

There are some donations people leave outside without saying anything that can easily give thrift store employees a heart attack. Can you imagine opening the door to something like this? Let’s just hope that thing isn’t haunted. Even worse? Let’s hope some random crazy dude isn’t hiding inside that thing!

And You, Sir, Just Won The Internet

Well, it might be a bit quirky and odd, but we would 100% wear this every day to work. But if you really want something that screams “I like cats” then keep scrolling!

This has got to be the most epic crazy cat lady armchair we’ve ever seen. If the person who snapped the pic didn’t buy it for themselves, then we will! They were morally obligated to purchase that thing whether they have use for it or not. That’s just the way it goes!

This is what happens when you lose track of your 2-year-old baby girl at the thrift store, and she’s actively trying to give you a heart attack. We bet that creepy old man mask is a total bucket of NOPE for mom!

To Infinity And Way Beyond

Dang! We have so many questions here! This bizarre thrift store find is a hybrid between fan fiction that’s illustrated but made into a key ring. Well, alrighty then! You gotta wonder what they did with the rest of the characters!

Whoever painted this thrift store gem definitely had very specific models in mind. Like, could you imagine the artist spending most of his weekends secretly painting himself as Batman and his buddy Dale from work as But why would anyone do that? Because life is short, that’s why!

Time to learn about the birds and the bees and the…frogs? Well, that’s an unexpected surprise! We don’t think you can ever unsee a human woman’s chest on a ceramic frog that’s supposed to be a decorative object you can just leave around the house. Now, who did this and what the heck were thinking? No, seriously. We’re dying to know!

Paint Me You Will

Painting this spectacular work of art was another one of Luke Skywalker’s tests that ended up on the cutting room floor. “But Master Yoda, I don’t know how to paint!!” Well, we can see why it got cut. That’s for sure!