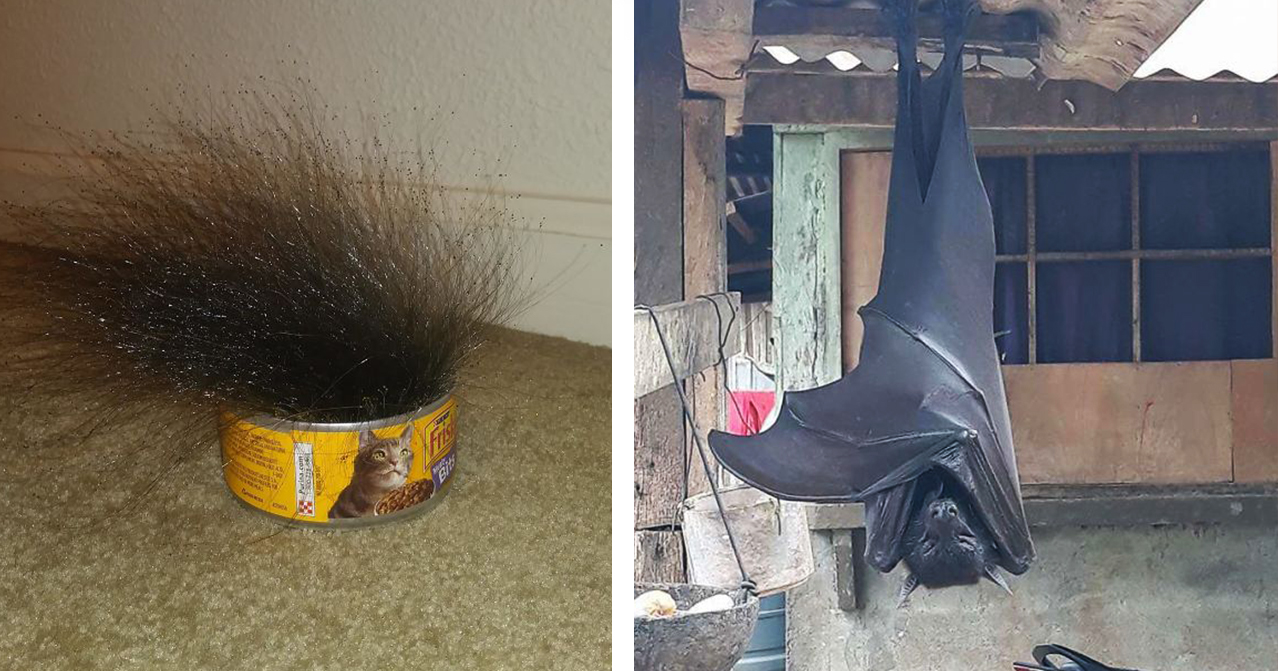 What’s not to like about nature? If we can all agree on something, it’s that this world is seriously beautiful. So much so, that we have a hard time believing it’s actually real! As humans, we understand the world around us by putting things into boxes. We tend to classify things as “pretty” or “ugly”. But when it comes to nature, boy are we left speechless! After all, how are you supposed to classify living beings, trees, and natural phenomenons when we can barely understand how these things were created in the first place? But Mother Earth isn’t all about puppies, sunshine, and flowers. There’s a very creepy side to her, and we can’t help but stare in awe.

Is That a Flying Fox in Your Backyard?

Bats can be somewhat adorable when they’re small. Well, that is if you can forget all those scary books that claimed bats love to feast on your blood! But when they’re this huge, it’s hard to believe that these mysterious creatures of the night are actually frugivores who only eat fruit.

Someone Left a Can Of Cat Food Open for 10 Days

Redditor Sideshowbvo shared a snap of the bizarre-looking mold he found growing inside a can of cat food he’d left out in the open for 10 days. Another week, and he probably would’ve been able to grow his own cat, right? The hairy-looking mold is eerily similar to a type of fungi called phycomyces.Thankfully for Sideshowbvo and his cat, this type of fungi is not known for releasing toxins.

A lot of people are scared of birds (and judging by this snap, their phobia seems to be totally justified!) But this image can scare the bejesus out of anyone! Thankfully, this “crazy bird tornado” is just a murmuration, which is nothing more than a thick flock of migrating birds. It helps the birds conserve their energy as each of them takes turns at the front, which also keeps them safe from predators.

Believe It Or Not, This Is One Of The Least Dangerous Spiders In Australia

Most people seem to have a healthy respect for spiders, so they stay as far away as possible from them. But although these Huntsman spiders look really intimidating at first, they generally stay out of biting humans. In fact, they’re a pretty common sight in Australia! These freaky-looking spiders also play a very important role as they help to keep down the populations of cockroaches and other small bugs. But if we had to take our chances between running into these giant spiders or stumbling into a couple of bugs, we might have to go with the latter! How about you?

A Rare Creature Was Found On The Beach

This out-of-this-world creature looks like a cross between an octopus and a zebra, with its alluring black and white patterns. But if you ever stumble upon anything like it, make sure to never go near it! This sea creature is known as an anemone, more specifically, a Dofleinia armata, whose stings aren’t something you’d ever want to experience anytime soon as it takes months to heal from them.

A Cluster Of Spiders Cocooned These Trees To Keep Themselves Safe

When a flood happens, humans aren’t the only ones who try to escape rising waters by any means necessary. In 2010 during monsoon season in Pakistan, all the insects looked for higher ground, including the spiders. They then covered the trees in what looked like spooky shrouds. The whole place ended up looking like it was ready to throw a fabulous Halloween bash! The strange phenomenon was captured by Russell Watkins, a multimedia editor for the UK’s Department for International Development in Sindh. He explained to National Geographic, “There wasn’t a scientific analysis of this being done. Anecdotally, I think it was pretty much any kind arachnid species, possibly combined with other insects”.

A Snaggle-Toothed Snake Eel Popped Up On A Beach

Eels aren’t exactly a well-loved, cuddly creature! But this nightmarish-looking species takes creepy to a whole new level. And no, what you’re seeing in that pic isn’t a 3d render or a super realistic-looking monster from a dope new videogame. It’s actually a tropical that’s known as the Aplatophis zorro. This creature has also been dubbed “the snaggle-toothed snake eel”. They can typically reach a length of 3″4 feet, which is pretty impressive for an eel and oh-so-freaking scary!

There’s a lot that happens in the ocean that we don’t know about. And let’s face it, some of it we don’t actually want to know about! This spooky creature is also known as a bigfin squid. It measures about 26ft in length. In November 2007, Shell captured this elusive creature in all its glory in the depths of the ocean in the Gulf of Mexico. While the footage is seriously impressive, we’d be quite happy to not be swimming in the coastal waters with this one.

Here’s proof of why you should always check your shoes before putting them on! This sleepy little fellow is commonly found in the forests scattered across the United States. They’re allegedly harmless as they’re not venomous. But if you ever run into a sticky situation like this one, be careful when trying to remove the snake. Instead of going for a bite, these rattlesnakes generally tend to spray their victims with a disgustingly-smelling musk. You’ve been warned!